The term ‘slope’ is perhaps the most discussed and, at the same time, the vaguest term in the golf terminology. Even if you are clueless about golf’s USGA rules, you have probably come across the term at some point. Several myths and misconceptions also cloud its meaning and relevance that even experienced golfers hit a wall when they need to interpret it adequately.

Course ratings and slopes are often considered the same, particularly when discussing a player’s index and handicap. Since USGA course rating system clearly distinguishes slope from course rating, we felt that we needed to address the question and clear out the dilemma of, ‘What does the slope of a golf course mean?’

A golf course slope is a USGA designated rating number that indicates the difficulty of a specific course for bogey golfers. This number is used to calculate a player’s handicap index. The value is between 55 and 155, and the average standard slope number ranges from 113 to 120. The higher the slope number, the more difficult the golf course is for average golfers.

USGA introduced the slope rating measurement in the 1980s as a system of fairness directed to bogey players. Namely, they observed that a bogey golfer is likely to increase the number of strokes considerably more when playing on a course with a higher level of difficulty than a scratch golfer. This led to creating a slope handicap system that is intended to offer equal opportunities for all players. 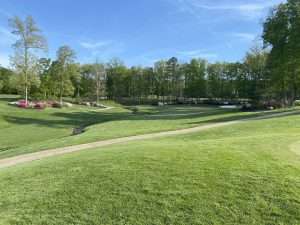 However, when playing or watching tournaments, you’ll notice that two numbers refer to the golf course rating, and this is what we will discuss next. We’ll point to how golf course rating is calculated and how it relates to the course slope.

How Is the Course Slope rating Calculated?

Thus, the slope number converts a golfer’s handicap into a course handicap. In this way, it is made sure that a bogey golfer is allowed to play at an equal level to a scratch golfer, and it helps them obtain enough strokes from the same set of tees. This is the mathematical formula of how it is derived:

So, once the golf course is rated, the bogey rating and the scratch rating are determined for each set of tees, leading to determining the slope number.

What is USGA Golf Course Rating and Who Rates It?

In other words, an average golfer should expect to play 68.9 strokes when the course playing difficulty is rated ‘easy,’ while on a challenging course, the same golfer is expected to average 74.5 strokes. On the other hand, as we have seen above, the slope rating is not related to the number of strokes played at the course in question.

Every golf association has a course rating team that has passed USGA’s Course Rating System regulations regarding the rating procedure.

What Is the Minimum and Maximum Slope Rating?

What Factors are Considered When Rating a Course?

When rating the course, the team evaluates the landing area for a bogey golfer the first 200 yards off the tee. They measure the width of the fairway, consider any existing bunkers, and estimate the distance from the fairway center to the nearest boundary/hazard line or trees. The same measurement is applied for scratch golfers, adding 50 yards to the landing area off the tee. The process continues until the team reaches the green. There, the rating team measures the depth and the width of the Putting green, the bunkers and the water hazards, and the distance to the boundary line.

The above-mentioned process is applied to every tee and every hole. When the measurement data has been obtained, (unlike the measurement used on a Rangefinder with slope) raters get the ratings for scratch and bogey golfers. Once they have them, then they proceed with the mathematical formula to calculate the slope number.

Yes, they do. However, the course rating impacts the golfer’s index considerably more than the slope number. It often happens that players become too focused on the slope number while ignoring the golf course number. It is important to note that if a certain course number is high, and some golfers might find it too competitive, it won’t necessarily mean that they won’t be able to play on another course. The formula below shows the significance of the course rating on the players’ handicap differential:

Being able to read the greens is critical to your putting success.  We have secured a up to 50% off deal with Strackaline, the #1 Green Reading Book in Golf.

Click here to see if your home course is available.