In the United States, golfing and the presidency go hand in hand. The fact that sixteen out of the last nineteen US presidents had a penchant for golf just proves that Golf is the favorite pastime of White House occupants.

Almost all the US presidents have played rounds of golf at some point in their presidency, but President Woodrow Wilson (our 28th President) played the most golf. He holds an awe-inspiring record of playing more than 1200 rounds during his six-year tenure.

In recent times, Donald Trump made headlines for his love of golf. It is reported that he spent some $50,000 of his own money to renovate the Golf simulator inside the White House. His predecessor Barack Obama was no different. Even Joe Biden is an avid golfer, from what we have heard.

It seems like there is hardly a president who didn’t play golf. We can count non-golf playing presidents on fingers, quite literally!

But before that, here is everything you need to know about the President who played the most golf.

American President Who Was Addicted To Golf –

Democratic President Woodrow Wilson takes the crown for most golf-addicted president. From 1913-1919, he played over 1200 games of Golf. The 28th president of the United States found time for golfing, even in challenging times.

It’s interesting to note that even a war could not stop him from hitting the links. He played a round of golf with his wife the day he launched a war on Germany. Back then, the media and public were not so critical about golf and presidential duties.

According to Wilson, golf helped him relax and was a major stress reliever. Although the more golf he played, the more terrible he was at it.

He played golf every day until he suffered a massive stroke, and with that, his golfing career was over.

Interestingly, 28th President Wilson’s wife was also an avid golfer and reportedly much better than him. The credit of their first meeting also goes to golf.

In 1915, when President Wilson and a friend were hurrying back to the White House after a rainstorm cut their golf session short, he first met Edith Bolling Galt. In December that year, Edith became the first lady of the United States.

“Each stroke requires your whole attention and seems the most important thing in life.”

Other Presidents Who Loved Golf

Dwight Eisenhower played a phenomenal role in popularizing golf as a sport. He not only loved playing it but also contributed significantly to the growth of golf.

He started playing golf at the age of 35 but quickly excelled at it. In his first year of playing, he broke 80, which is a huge accomplishment for a novice player.

Eisenhower used his power for the good of the sport, and unlike other presidents, he loved showing his prowess at golf in front of the public eye. By doing so, he popularized golf as a commoner’s game that was generally known to be a game for rich people.

During his tenure, he knocked out 800 rounds of golf which makes him a true presidential golfer. Eisenhower loved playing golf at Augusta National Golf Club, a prestigious golf club he frequented during his time in office.

He was also the first to install a green at the White House, where he worked on his putting and short game after a stressful day. Although Eisenhower was not a naturally gifted golfer, his hard work and sheer dedication to the sport turned him into a good golfer.

The American public started treating Golf as a commoner’s game. His influence on golf earned him a place in the World Golf Hall of Fame in 2009. He is the first president ever to be honored with this title.

“If (President Eisenhower) slices the budget like he slices a golf ball, the nation has nothing to worry about.” (Bob Hope) 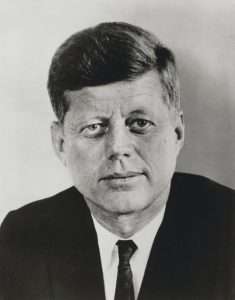 John F Kennedy, the 35th president of the United States, also shared a fondness for the golf game, just like his predecessors. He played for Harvard and was pretty famous for his golf swing.

Kennedy was not addicted to Golf like Wilson and Eisenhower. His bad back stopped him from hitting the links too often. Nevertheless, he truly enjoyed the sport and constantly worked hard to improve his swing.

His charisma and popularity did help the game of golf, although he was not fond of playing publicly. In his early days, he seldom made an appearance while playing golf; however, later, he became more confident and shared his passion for Golf through some rare glimpses with the American people.

Despite his bad back, people could see how graceful he was when he played. It is no wonder that he was a single-digit handicap, a sign of a skilled golfer.

Sadly, his tragic death also cut short his golfing career. Otherwise, there is no telling how much he would have done for Golf’s growth.

In August of 1963, to improve his game, Kennedy decided to seek help from famous Golfer Arnold Palmer. He asked a White House photographer to tape him while he was playing at the Hyannisport Club. He wanted to share the tape with Palmer to seek his expert advice on how to improve his game.

In response to the question of why he wasn’t comfortable playing golf publicly, Kennedy shared: “It is true that my predecessor did not object, as I do, to pictures of one’s golf skill in action. But neither, on the other hand, did he ever bean a Secret Serviceman.” 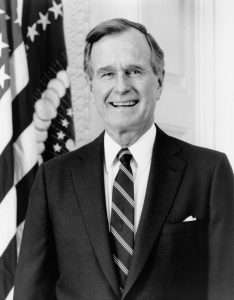 George W. Bush exerted great influence on Golf as well as America. Due to his many achievements, the 41st president has earned his place in the World Golf Hall of Fame. Not only this, but he was a strong proponent of the walker cup as well as a leading figure of the First Tee movement.

It won’t be wrong to say that the Love of Golf was ingrained in his blood, considering his lineage. His father was a President of USGA, and his Grandfather, George Herbert Walker, was the founder of the Walker Cup.

Not only did he influence the game significantly, but he was also a skilled golfer. His handicap was, at one point, as low as 11, which is quite impressive. 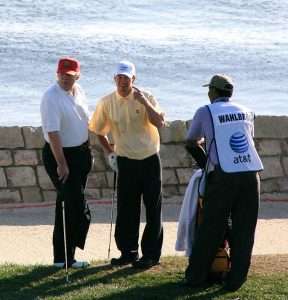 Our list of “which president played the most golf” would be incomplete without mentioning Donald Trump. He is a single-digit handicap which the media have acutely criticized for playing too much golf. He also owns many golf courses all over the world including Trump National Golf Club. Donald Trump even has his own Wikipedia page dedicated to golf which you can see here.

According to stats, Donald Trump has played 261 rounds of golf in four years compared to 44th President Obama’s 333 rounds in eight years. On several occasions, his staff refused to confirm whether he was playing golf or not, which means the number can be much more than what is estimated.

“I’m going to be working for you. I’m not going to have time to go play golf”. Said Trump while criticizing his counterpart, President Barack Obama, for his love of golf.

Which American Presidents Did Not Play Golf?

While most presidents loved to “hit the links,” some presidents did not find golf interesting at all. Presidents Jimmy Carter, Harry Truman, and Herbert Hoover did not play golf for several reasons. They had various hobbies, but golf was not one of them.

Thanks for visiting PG Golf Links. Please be sure to check back often for updates and more in-depth golf reviews including Scramble versus best ball, Golf umbrellas, Golf cart heaters, top rated forged irons, What wedges should I carry and much more.