Despite the common features, Golf’s Best-Ball and Scramble formats are two different team game-formats with a different set of rules.

The “Best Ball” format requires each golfer to play their own ball throughout the entire round. The team score is determined by the lowest score made by any member of the team on each hole. In a “Scramble” format, the team decides which one shot to select after all players have hit, and then all golfers hit their next shot within one club length of this ball.

In the scramble format, which is often us in amateur golf tournaments, choosing the best ball to play continues for every shot through 18 holes.

Yet, even though fairly different, many golfers still confuse the two or even merge them into one game, calling it Best Ball Scramble. We are going to take a look at the differences and similarities these two game-formats have, and help you choose the one that appeals to you.

What Do Best Ball and Scramble Have in Common?

Firstly, both games can be played from any set of tees on a regular golf course. Both of them are team games, so you can boost the social aspect of the game and compete with fellow golfers. Both formats support teams of two or four, but you can also determine the number of golfers who’ll join the team.
In both game formats, the team with the lowest score wins. So, let’s now take a look at each game’s rules and explain how to play them.

How Do You Play Best Ball?

To play Best Ball, you need teams consisting of 2 to 4 golfers. It starts when each player tees off and strokes his ball until he/she holes out. This means, Best Ball format allows golfers to keep track of their score and play their individual strokes throughout the round. 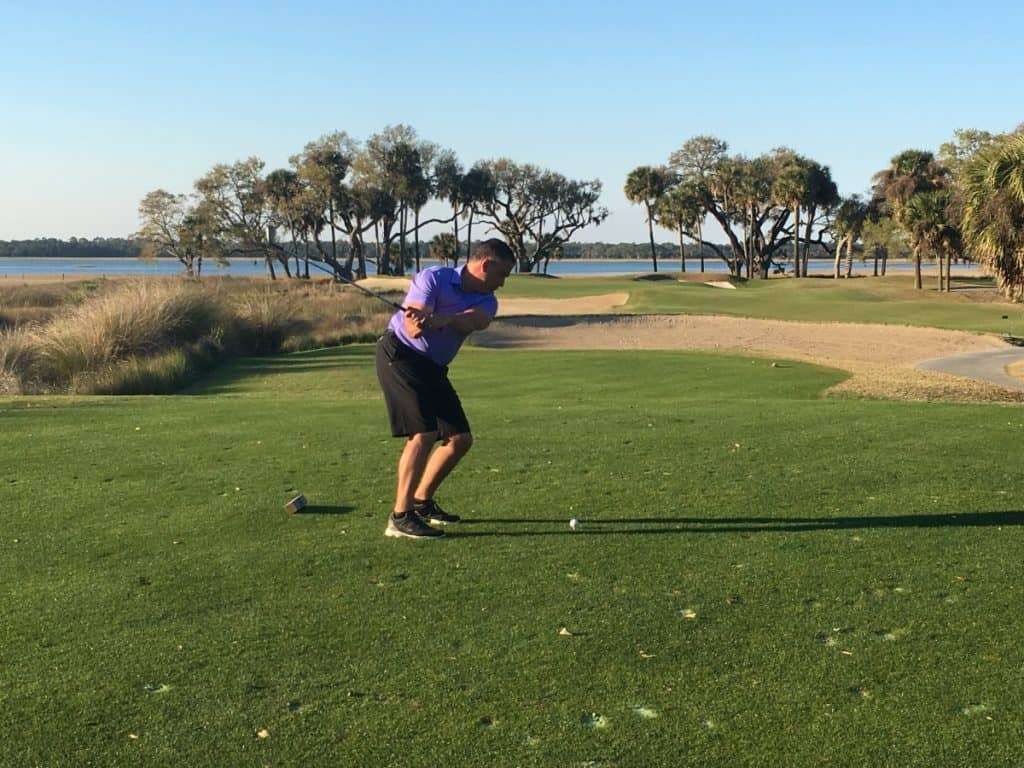 The best ball format can have several variations as well. You may have a foursome and count one ball, two, or even three balls per hole. The one constant is that you will not be using the highest score on a particular hole.

Let’s illustrate the process. If there are two players in the team, and player X records a 4, while player Y records a 6, then for that particular hole, the team records a four as their best ball score. At the same time, both players record their individual scores for each separate hole. The team with the lowest score for all of the holes played is the winner.

What Are Best Ball Strategies?

Within the Best Ball system, there are two types of strategies that take into account player’s handicaps. The first one is the so-called ‘Gross’ Best Ball, where everyone plays at scratch level golf, and no strokes are taken away or given to players. Yet, some tournament organizers demand players to record their gross scores after they turn in the cards so that adjustments in handicaps can be made. In such cases, teams should keep a record of the players who receive a stroke on the scorecard.

The other type is the so-called Net Best Ball which is applied when you play with a handicap. Within this system, if a higher handicapped player scores a boogie, the system will awards the team a net par to get that score as their best ball. It is a system that equalizes the differences among the player’s skill levels.

How Do You Play a Scramble?

Similar to Best Ball, a Scramble is a team game format played in teams of two, three, or four players. The game starts when each player takes a tee shot. After each player takes a shot, the team decides which is the best shot, and each team member will then play the shot from within one club length of this ball. 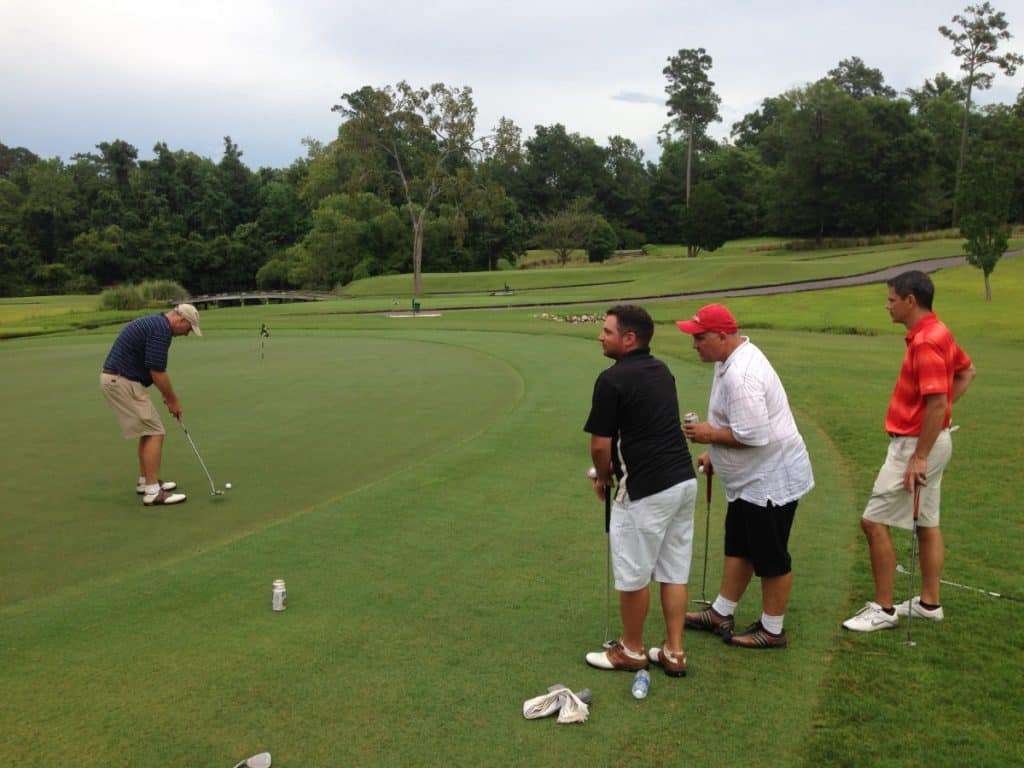 The players whose shots you didn’t choose, get their balls and bring them to the best shot location. From there, players take their next shot and repeat the procedure till they hole out. That is how the players’ score is recorded.

The rules imply that players must place their extra balls within one club-length of the selected best shot and no closer to the hole. Also, golfers can’t change the cut of the grass where their ball is. For instance, if your ball is in the rough, you can’t position the ball in the fairway even if it is within one-club length.

The scramble format is a more preferred option for amateur golfers since the team’s captain can simply ignore bad tee shots and choose the most prospective ball. There are also various skill sets in the Scramble format, which allow golfers to take more risks and make the game more fun. For example, you may have players that hit the ball extremely far. The team may decide to have this teammate”go for it” on short par 4’s or on the second shot of a Par 5.

What Are Scramble Strategies?

Compared to standard stroke play, the Scramble format allows golfers to implement a variety of strategies to win tournaments. These most refer to forming the team and taking advantage of team members’ strengths.

We all know that putting is highly important, so it is recommended that you have at least one golfer who excels at putting. The best putter will typically be the last to putt on a hole so he or she has the ability to watch the line, speed, break and direction of previous putts. Your best lob wedge player will hit last from short shots around the green.

Longer drives, birdies, and eagles will all get you closer to winning the tournament, so having a long and Accurate mid-handicap driver is beneficial.

The order of play can help you get a victory, so choosing the right golfer for each game section to start first is essential. The player who is the most accurate should start off the tee, as he/she will get the ball to the fairway which will lower the pressure off the team members. From that shot, the order goes from the shortest hitter to the longest. Unlike teeing off, when it comes to putting, the worst player should start first, and the best one should go last.

What Is a Texas Scramble Score?

To make Scramble more competitive and authentic, event organizers have created variations to the format by adding additional rules. The most popular variation is Texas Scramble, which differs from the regular Scramble by the limited tee shots.

The Texas Scramble requires the team captain will have to choose 4 tee shots from every member during the round. Also, you might not be allowed to play the same golfer’s drives on consecutive holes.

Best Ball vs. Scramble. What Are the Benefits of Each Golf Format?

Both game formats are team formats and have advantages and disadvantages. What golfers find the most appealing is the fact that golfers with higher handicaps can give their own contribution to the team’s score.

Scrambles is much more convenient in this regard since it is the best shot that counts the score for each hole. Best Ball format, on the other hand, demands from the golfer to do constantly well on the entire whole so that he/she contributes to the team’s score.

Another perk that Scramble offers is leaving the comfort zone and trying riskier shots, i.e., shots that you wouldn’t dare perform in the Best Ball format. This usually happens when one of the team members makes a really good shot, then the rest of the team players can simply risk and try a variety of shots that don’t have to be picked if they turn out unfavorable.

The rules of golf apply in both formats, however, each of them has its own specifics that we have already discussed above. When it comes to duration and the complexity of each format, Best Ball is easier and takes less time. That’s because the team’s captain doesn’t have to assess the shots and choose the best shot, and golfers don’t have to collect their balls. Players play the hole as they normally would and then they determine who’s got the lowest score.

Thanks for taking the time to check out PG Golf Links. Please check back often for reviews and updates of the latest golf products and events.